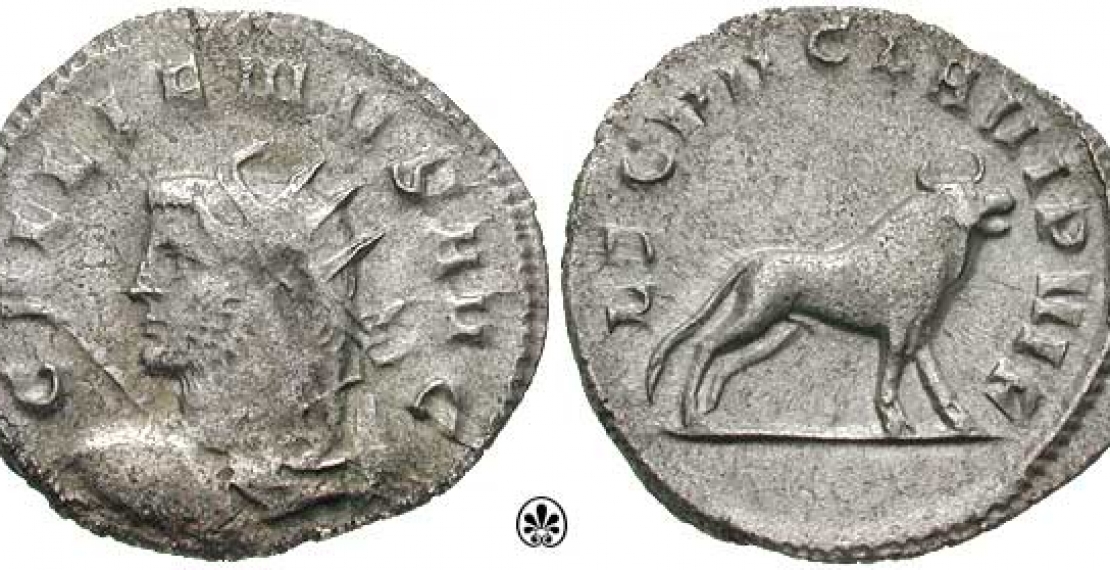 Abstract: In this case, however, we cannot define Marcian either as a legate or as a praeses of Upper, Lower Moesia, Thrace, or Macedonia, as such a post would certainly be reflected in one of the inscriptions. It is possible that he was dux ripae, a position that gained immense importance in the middle of the third century.

An enigmatic man is undeservedly rarely mentioned in the historiographical tradition for the third century AD, although he seems to have played a decisive role in some of the most important events of the century and at some point, could have claimed the Roman throne. Marcianus, together with Aurelianus, were probably the main actors in the repulse of the Goths in 267–269. Until the 20th century, his name was known in several versions only from written records, after which several epigraphic monuments revealed additional information about his career. According to Historia Augusta, Marcianus and some Heraclianus were the people who, aided by the future emperor Claudius, stood at the bottom of the conspiracy to assassinate Gallienus (HA, Gall. Duo, XIV, Et haec quidem Heracliani ducis erga rem p. Devotio fuit. Verum cum Gallieni tantam improbitatem ferre non possent, consilium inierunt Marcianus et Heraclianus, ut alter eorum imperium caperet --- 2 et Claudius quidem, ut suo dicemus loco, vir omnium optimum, electus est ...). However, this remains the only source in which Marcianus is mentioned among the participants in the conspiracy against the emperor, and it is most likely that the compiler of the source named him as such because of his importance in the constellation of power.[1] Information about this person can be found in  HA, Div. Claud. VI, 1, XVIII, 1; Zosimus (I, 41). All the mentioned sources are categorical that in 268 Marcianus was left by Gallienus in the Balkans to deal with the Gothic danger, while the emperor went to Italy to deal with the betrayal of his general Aureolus, where he met his death.

The epigraphic evidence significantly helps us to understand Markian's career and therefore his significance in the turbulent years 267–269. The most important testimony so far was discovered in 1963 in Plovdiv and published by B. Gerov. It is a pedestal of a statue with a Greek inscription that reads  (Gerov 1965 = AE 1965, 114 = IGBulg V 5409):

The epigraphic documentation of Markian's life is supplemented by several other epigraphic testimonies. Extremely interesting is an epigraphic testimony from Rhodes, which generally has a similar style and glorifies Marcian in the same way: τὸν διασημότατον στρατηλάταν (SEG 47, 1256.),  which must be dated to 270 and is probably related to recent events against the Goths, when Marcian apparently still played a leading role. An inscription from Termesos  is usually associated with Marcian. It mentions L.[2] Aurelius Marcianus, who was vir perfectissimus, dux (IGR III 436 = Christol 1978),  most probably in the time of Emperor Probus. Finally, an Aurelius Marcianus was also vir perfectissimus and praeses in Dalmatia (CIL III 8707 of the Salon). This information is supplemented by a recently discovered inscription in Augusta Traiana, which accordingly shows that the deeds of General Gallienus were honored with an article and eulogy here as well. On top of that, Marcianus was also seriously associated with the city, as in the inscription he was called λογιστὴ[ ς ] τόνδε πάτρωνα , in other words the patron of the city's extraordinary magistrate, appointed by the emperor.[3]

For now, we leave aside the question of the importance of Augusta Traiana in general in Gallienus' policy and the apparently large concentration of inscriptions of generals from the pre-Gallian or Gallian "mobile army" in the city,[4] as well as two other Roman administrators of Thracian origin (IGBulg 1569, IGBulg 1568), whose names were M. Aurelius Apollinarius and Aurelius Heraclian. It is obvious that Augusta Traiana, the later Beroea played an extremely important role in the development of Gallienus' mobile army, which must probably be linked to the special attitude that Trajan Decius had towards the city (see Gotti).

The purpose of this text is to clarify the key moments of Marcianus career. We should probably have little doubt about his early career – being of Thracian origin, most likely of Augustus Trajan, Marcianus acquired the position of protector in a way that resembled that of Traianus Mucianus. The name Marcianus is a banal Roman cognomen, characteristic of the newly romanized population due to the fact that from end of the 2nd century most of the new citizens bore the name Marcus Aurelius, and Marcianus is a derivative cognomen of the name Marcus. Undoubtedly, Marcianus was part of the wave of recruits from the Balkan lands who joined the Roman army – often in irregular guard formations or "ethnic" corps in various branches of the army, such as the lions of Caracalla. A typical example is the career of Maximinus the Thracian. Probably by the time of Philip or Trajan Decius, Marcianus had become part of the protectorate corps. After that it has been possible for him to be a Centurio trecenarius, supreme title cursus old and the new training probably command a separate unit, after that he was a tribune of Praetorians. The most important position in the inscription is that of dux. The last title is enigmatic because it can speak of commanding a legion, or it can speak of commanding a larger army. However, the not particularly enigmatic title of stratilate suggests the second possibility, because it must have served as a predicate, namely to denote the position of the dux not as a legionary or cavalry commander, but as a commander of a whole military war detachment, or, in modern terms – on the "front".

To understand Marcianus competencies as a dux stratilates, we need to dwell briefly on the military-administrative history of the region from the time of the early Principate. Elsewhere it has been pointed out that the problem of the emergence of Moesia as a province is above all a problem of differentiating the periods in which it became a separate province from the larger provincial union with Pannonia (Illyria), commanded at different times by members of the imperial family, or by aristocrats from the Augustus circle (M. Lolius, Caecina Severus, etc.). A considerable number of sources and epigraphic evidence indicate that in the following centuries of Roman rule in these lands, such a union, under the rule of a special legate, was preserved. In Hadrian's time, his right-hand man, the horseman Quintus Marcius Turbon, was commander in Pannonia and Dacia. [5] This also happened during the Marcomanni Wars of Marcus Aurelius, when Claudius Fronton, legate of Upper Moesia, took command of all three Dacias. [6] In the turbulent third century, such administrative decisions are even more clearly visible. In the time of Caracalla and Macrinus, there seems to have been a military commandant's office here, which was subordinated to a deliberate praefectus or procurator, such as the future ruler Maximinus the Thracian, and which included parts of Upper Moesia, Lower Moesia and Romulus Dacia. A very typical example of the granting of extraordinary powers are the panicked appointments of Philip Arab at the beginning of the riots in the army and the Gothic insurgents on the Danube. The emperor sent here the future emperor Decius, initially in his capacity as dux Moesiae et Pannoniae. In 253, the contender Aemilius Aemilianus took power from the positions of governor of both Moesian provinces, and A. Stein spoke of the complete abolition of the provincial system of separate government of the two provinces.[7]

In this case, however, we cannot define Marcian either as a legate or as praeses of Upper, Lower Moesia, Thrace, or Macedonia, as such a post would certainly be reflected in one of the inscriptions, even if we assume that in time to Gallienus, the old designations of governors might have lost their significance.

The source information, which defines Marcianus simply as dux, does not help either. Gall. Duo, VI.1. Pugnatum est in Achaia Marciano duce contra eosdem Gothos, unde victi per Achaeos recesserunt. What is significant in this passage, however, is that Marcian is also credited with defeating the Goths far to the south, in Achaia, which showed that in one way or another his military powers extended over the entire Balkan Peninsula. A little more specific seems to be Zosimus, who explicitly speaks of the fact that Markian is entrusted with strategian, i.e. in general, military power over the Goth-threatened region. All this leads us to assume that Marcian had extraordinary powers over the "great" commandant's office, which included the provinces since the August conquest of the Balkans. The only reasonable possibility remains that Marcian was prefect of the coast, or, to use the probably correct terminology of his time, dux ripae, with powers (strategia) over the Danube Limes troops in the two Moesias, Dacia and maybe also Pannonia (see Duces Ripae). As commander in chief[8] of the army in the Balkans, Marcian also had authority over the troops in the provinces. Known inscription from Pergamum, who called Trajan officer Iulius Quadratus stratilaths, with powers to lead Dacian war.[9] Mucianus’ position is therefore close to what was called magister exercitus in Late Antiquity. It is quite natural that they were practically inermis, which is why it was completely natural to be revered as the liberator of Achaia – and probably not only.

[1] On the conspiracy against Gallienus and the sources: Hartmann 2006.

[2] With misreading the letter "Delta".