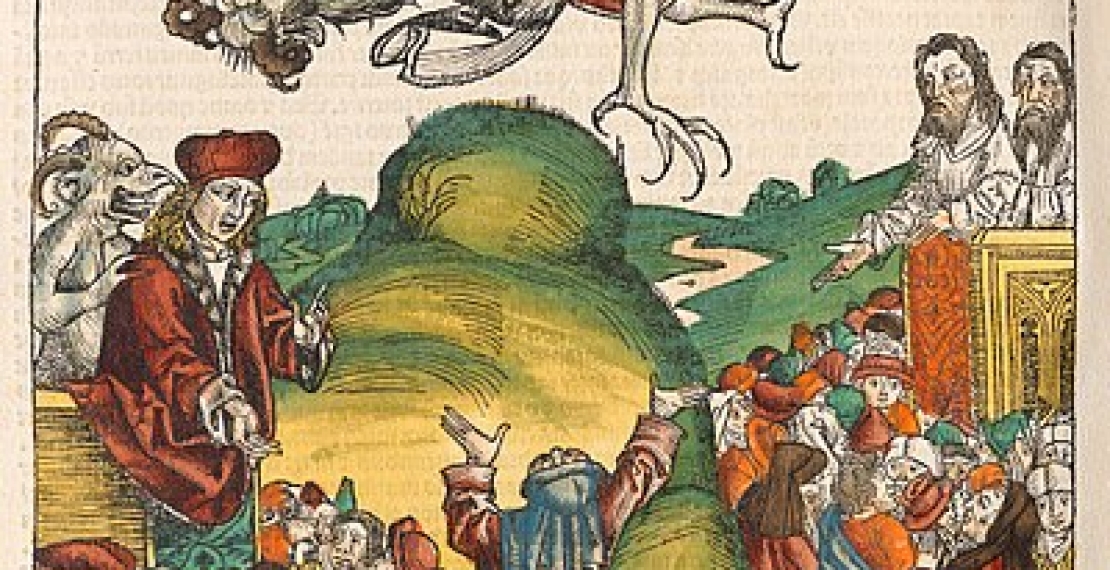 Abstract: According to the Christian sources of Late Antiquity Simon the Magus is considered the founder of Gnosticism. He is first mentioned in the New Testament Book of Acts (8:9-25). It is very likely that he was a Samaritan and interpreted the Jewish tradition in his own particular way. He traveled to major cities of Palestine and Syria and during his travels he preached along with a former prostituted named Elena, whom he portrayed as the incarnation of the “First Thought” (ἐπίνοια, ἔννοια) that proceeded from God. Furthermore it is assumed that he was strongly influenced by the pagan cult of Ishtar, popular during that times in Tyre, where he acquainted with his female adherent. He also had other adherents who were also influenced by the Eastern Judaic tradition of that era – Menander, Saturninus, Cerinthus and Carpocrates. Each of them had his own specific beliefs and it is difficult to support that there was any systematic teaching.

Simon the Magus came probably from the city of Sahir in Samaria. He is first mentioned in the New Testament Book of Acts (8:9-25). He was baptized by the Apostle Philip but according to the Apostles Peter and John he turned out to be an unworthy Christian because he wanted to pay them in order to receive the grace of the Holy Spirit. This, of course, earned him the nickname Magus in the Christian tradition – magus (μάγος) i.e. magician, charlatan (Mat. 2:1). The information about Simon the Magus is derived from the Refutation of all Heresies of Hippolytus of Rome, the Apocryphal Acts of Peter and Paul, the Pseudo-Clementines, the Catecheses of Cyril of Jersualm, the Origen’s work Against Celsus and Eusebius’s History of the Church. However we doubt the credibility of these testimonies.

We do not have any work of Simon, but the book “The Great Exposition,” is considered as the main presentation of his belief system. However, according to the researchers of this tradition this is a later compilation composed by his followers.[1]

It seems that Simon was quite popular in Samaria during the middle of the 1st c. AD (Justini Apologia prima pro Christianis I, 26.1-3 (PG 6, 368A)). A former prostitute named Elena from the Phoenician coastal city of Tyre accompanied him on his missionary travels in the region. Simon’s sermons claimed that she is the first divine “Thought” (ἐπίνοια, ἔννοια), that proceeded from God. Simon claimed that the “First Thought,” as it proceeded from God, descended into the lower realms of being beget the angelic ranks, who imprisoned it in the present state and sought to rape her in order to multiply the present creatures. For this reason, she turns out to be a personalized wanderer, but she was redeemed by Simon – the incarnation of the eternal supreme God.[2] He himself represents the supreme divine power, which is everywhere in the world and which through a series of incarnations manifests on different leves of being in the present world. Moreover God created an androgynous form of his image in the world, which is divided into two sub-primary principles – male, which is the Mind (νοῦς) and female (ἐπίνοια, ἔννοια), which yields the reproductive power.[3]

The main origin of being is the impenetrable Silence, a pre-existing unlimited force which exists in total unity. It moves and assumes a certain form, transforms itself into Thinking (νοῦς, i.e., Mind). So, the Mind and the Thought are no longer one, but two: in his Thought the First “appeared to himself from himself and thereby became a Second.” Thus, through an action of reflection, the indefinite and only negatively described power of the Origin is transformed into a positive principle entrusted to the object of its own thinking, even thought the object is itself. It is still One in that it contains the Thought in itself, despite that is already divided and does not exist in its entirety. Now the whole sequel here and in other speculations of this type depends on the fact that the Greek words ἐπίνοια and ἔννοια, like the more frequent σοφία (wisdom) are feminine in other systems of thought and the same is true for the Hebrew and Aramaic equivalents. The Thought begotten from the Original One or The One, relates to him as a femine principle; and in response to her capacity to conceive the Mind (νοῦς) assumes the masculine role. Consequently he receives the name of “Father” when his Thought calls hims by this name, i.d. she turns to him and urge him to his generative function. In this way the original division arises from “educing himself from himself and making manifest to himself his own thought.”[4] The manifested Epinoia beholds the Father and hides him as the creative power within herself and to that extent the original Power is drawn into the Thought and creates an androgynous combination:  the Power (or Mind) is the upper and the Epinoia the lower element. Although are conjoined in unity, they are considered, at the same time, opposite to each other; and in their duality highlight the distance between them. The upper principle – the great Power – is in this combination the Mind of All, governing everything and is male. The lower principle – the great Thought – is the one bringing forth everything and is female (Hippolytus, Refutatio Omnium Haeresium (6.8)).

According to Hippolytus of Rome, Simon was engaged mainly in magical acts, staging strange performances and transforming himself into various beings (Hippolytus, Refutatio Omnium Haeresium (6.15)). Apparently the element of magic was at the heart of his teaching and practice. It is very probable that his perfomances, related to occult sacraments led to his early death, probably in Rome.[5]

He left behind followers who had various doctrines. The first of them was Menander also from Samaria but he preached in Antioch (Hippolytus, Refutatio Omnium Haeresium (7.16-28)). Another of his followers was Saturninus, who professed that the world was not created by Epinoia/Ennoia/Sophia but by seven angels. He also included in his mythology the image of Christ as a famous Gnostic teacher. It is probable that related to Simon were also Cerinthus and Carpocrates, who lived in Asia Minor (the latter might be from Egypt). They were all active during the 2nd c. AD and were not widely popular. It is very likely that they interpreted the Christian message from an adoptionist point of view, because Cerinthus formed a concept of Jesus being separated from the person of Christ. According to Carpocrates Jesus was an adopted Son of God, begotten from Mary and Joseph, and Christ is a divine person who overshadowed the man Jesus at his baptism by John the Baptist in the Jordan river.At the moment of the crucifixion, the Person of Christ was separated from Jesus and the latter died on the Cross and later was resurrected.[6] It is also said that Cerinthus had a dispute with John the Theologian in Ephesus (Eusebii Historia ecclesiastica 3.28 (PG 20, 273CD)).

The big question in the study of the thought of Simon the Magus and his disciples is to what extent they are part of the Christian tradition or if they are part of this tradition at all. Rather than that Simon can be considered an interpreter of the early Gnosticism nascent in the East Jewish tradition, but he was also strongly influenced by the local Smaratian deities, revered by the population of Samaria. This population was brought to Palestine and misunderstood the Jewish religious tradition and worship. Simon was certainly an educated man, because we detect influences of the Platonic tradition in his terminology. He certainly was acquainted with Judaism to some extent, but what is evident from his speculations is that he did not know in-depth the interpretation of the Halakah tradition and his teaching did not correspond to the well-knit Jewish tradition of the Temple.

We can assume that his whole teaching is a typical gnostic attempt of mystification and the most interesting thing is that this teaching arises from the soil of Judaism at a very early stage in the development of this movement. After all, Simon the Magus is hardly the first Gnostic in history.

Jonas, H. (1958) The Gnostic Religion. The Message of the Alien God and the Beginnings of Christianity (Boston: Beacon Press).