Abstract: The shrine of Asclepius near the district of Batkun in the village of Patalenitsa of the Pazardzhik region is the largest known extra urban shrine in the Thracian lands during the Roman era. This worship center appeared at the end of the 1st c. AD or at the very beginning of the 2nd c. AD and functioned intensively until the time of Theodosius I, when it was forcibly destroyed and burned.

The shrine of Asclepius, which is located in the vicinity of the former village of Batkun, a district now of the village of Patalenitsa, is the largest known shrine in the Thracian lands. It was discovered in the 19th c.,[1] and the archeological excavations were carried out by Dimitar Tsonchev in 1939[2]. The religious site is located in the area of Haidushkoto kladenche (Hajduk well) in the northern foothills of the Rhodopes. There are many springs in the vicinity and next to one of them the shrine was built.

Despite its great popularity, the shrine at Batkun is not distinguished by a particularly monumental and notable architecture. During the excavations, the remains of a square building with measures 19.5 x 19.5 were examined. The construction was made of quarry stones and mortar with belt courses of three rows of bricks in height. Due to the steep slope of the terrain, the building is not oriented according to the cardinal directions, but southwest to northeast. It is not clear in which side was the entrance. In the eastern corner of the building there is a cold spring, which probably flowed through the entire area of the shrine.[3] There is not enough information on the architectual decoration of the complex. Separate architectural fragments, such as bases, Dorian capitals and a column fragment, were found during the excavations, but they are more of a votive function[4]. Due to the significant size of the building, as well as because of the thick layer of burnt wood just above the floor, D. Tsonchev suggested that the ceiling was made of wood.[5] 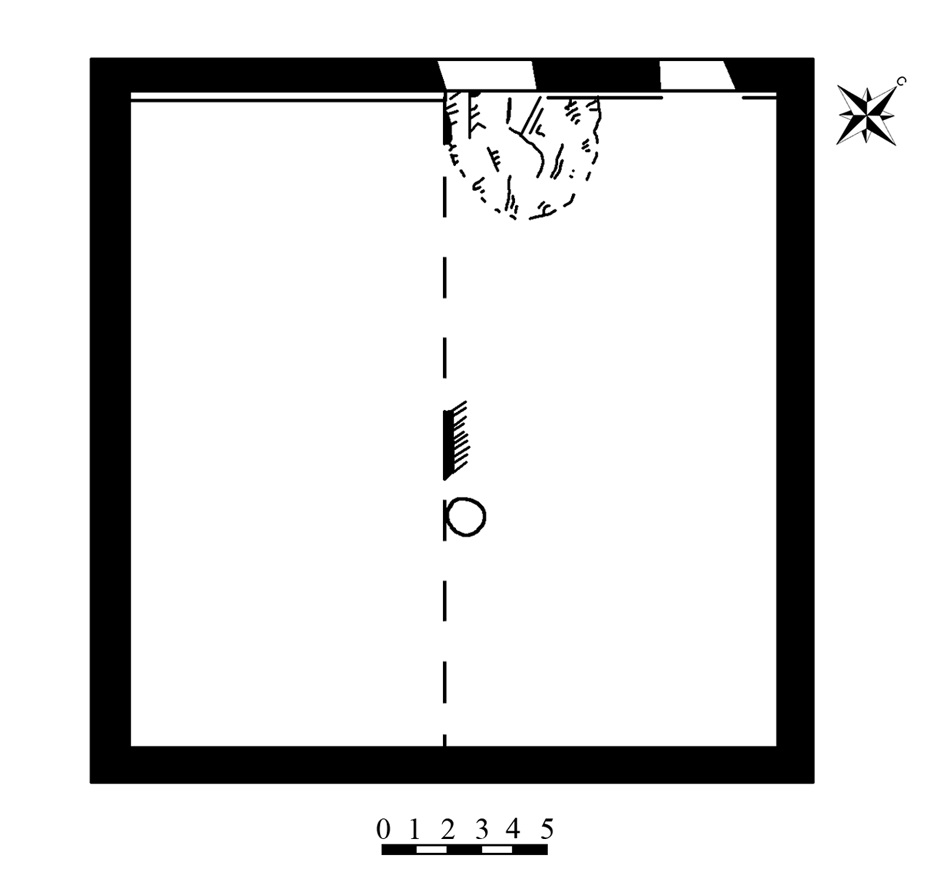 The health deities Asclepius, Hygia and Telesphorus are depicted according to the typical iconography of the Roman era. The healing god is portrayed as an old man with long hair and a beard standing upright. His characteristic symbol is a serpent-entwined rod that he wields. Sometimes Asclepius is depicted as sitting on a throne (IGBulg III, 1, 1166),[8] and once as  а horseman[9]. Hygia in all cases is represented very standardized in iconography – upright, opposite, wearing a long belted tunic, holding a libation bowl in her left hand (patera), while a snake is wrapped around her right hand. Telesphorus is presented in his typical low hood and wide cloak. The votive monuments with images of the Thracian horseman are very fragmented, but it is evident that almost all known iconographic types of the deity are depicted.

The dating of the shrine is not entirely defined and remains unclear. The researcher of the compex D. Tsonchev dates it back to the second half of the 1st c. AD, and its destruction – at the end of the 4th c. AD.[13] Afterwards the possibility of the existence of the complex in the pre-Roman era was also admitted[14],but there is no concrete evidence of this at the moment.[15] The earliest monument is a dedication to Asclepius, made by the commander (στρατηγός) Dizala, son of Cotis, and the people around his brother Roimos, dating back to one of the consulates of Emperor Trajan (IGBulg III, 1, 1116+1115) – т. е. during 100, 101, 103 or112 г. the idea of N. Sharankov that the monument in question is connected with the actual foundation of the shrine is complete acceptable.[16]

Coins discovered during the excavations are of special importance for establishing the time of the compex’s demise. They are relatively few compared to those of other Thracian shrines – only twenty-one and only half of them are legible. The earliest coin is from the time of Antoninus Pius (discovered before the research), and the next one dates back hardly to the time of Emperor Tacitus.  All the others are from the 4th c. A – one is of Maximian Herculius and Constantine I, four by Constantius II and one for each Constantius Gallus and Theodosius I.[17] The latest coin is that of Theodosius I and marks the destruction of the complex. This was done violently and was accompanied by arson, as evidenced by the 0.20 to 0.50 m. thick burned layer lying just above the floor.[18] The votive monuments were deliberately broken, smashed into small pieces and scattered around the complex, which leads us to believe the existence of a targeted anti-pagan campaign aimed at radically erasing one of the most popular cults in Thrace.

At the end of the 4th c. AD, the pagan religious worship celebrated in Batkun was ceased. There are no preserved archeological materials from the early Byzantine era or from the Middle Ages to indicate the preservation of the old pagan tradition or its reogarnization in a christian way.